Numerology Calculation
Tells You If Your
Name Is Good Or Bad

How Is Your Name?

Name is really your most important identity. The numerology calculation reveals to you if it is good or bad.

You are called and remembered by your Name. Unless it is perfect, you can not enjoy health or happiness.

Only when you are assailed with a series of problems, you worry if some thing is wrong with your name.

You are not alone. Most people are like that. Only when all the doors close shut, when all opportunities slip through your fingers, and all your friends desert you, you begin to wonder on what is really wrong with your name.

And you are right. Name is your invisible dress. It envelops you with an aura of vibrations. You constantly radiate some thing good or bad to the world through that aura. If it is good, the world greets you with success.

If not, it greets you with failures. Name Numerology lets you know when your name is defective. In that case, you meet with delays, disappointments, and defeats. You meet with obstacles in each step.

As per name numerology, a defective name engulfs you in problems. You begin to fail in family and business. You do not keep good health. You frequently fall sick. You see others succeed, when you repeatedly fail.

On the contrary, if you analyze by numerology calculation the names of others who overtake you, you come to know that there is some truth in name numerology. When you go deep, you become convinced about it.

There are two ancient systems in name numerology. Vedic Numerology and the Chaldean Numerology stand out as the most reliable. The Pythagorean Numerology is a later development by the mathematics genius Pythagoras.

Pythagoras did research in numerology calculation. He was a very famous mathematician and yet he strongly believed in numerology. This itself is a strong evidence that there is something important in this occult science.

Not only Pythagoras. Many great men of yore had believed in numerology. Cheiro, the most versatile genius asserted that numerology is part of the great wisdom of the ancient Hindus. Pythagoras tried out his own methods.

Vedic Numerology calculation has no numerical order. It follows the numbers given by God for the Sanskrit Language. It was based on sound vibes. In modern times, These were translated to the English alphabets.

The Chaldean Numerology was given by God for the Chaldean language and phonetics. It gained fame. It thrilled the future English researchers. They got it for the English alphabets with the help of Chaldeans. 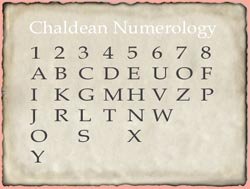 Both followed the same numbers for each English Alphabet. But surprisingly both systems have no alphabet for 9.

See the above image for alphabets and values in Chaldean Numerology. 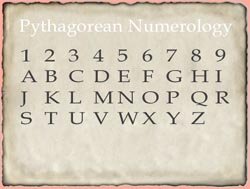 The non sequential order and no alphabet for 9 in numerology calculation intrigued Pythagoras.

He added 9 and gave consecutive numbers to English Alphabets. It was known as Pythagorean Numerology.

Find in the above image alphabets & numbers in Pythagorean Numerology. The Pythagorean gained recognition as it was easy to remember, memorize, and computerize.

It became popular because more than 95% of the numerology websites on the internet use this to dish out speedy, instant reports. But these reports bear no relevance to the welfare of the clients who take such reports.

It was Cheiro who declared that Numerology Calculation for names was done first in India for giving new names to ascetic disciples. He visited India often and learnt the secrets of numerology from the Indian Sages.

He popularized Vedic Numerology combining it with the Chaldean system. He proved to the world with verifiable research that name numerology played a major role in shaping your character and deciding your fortune.

The Vedic Numerology or Chaldean numerology calculation is highly intricate. It is based on sound vibes. It needs years of practice to master. It needs a high degree of intelligence to give correct interpretations.

Hence, it is difficult to computerize. But Pythagorean is easy for computer as it has consecutive numbers for alphabets irrespective of sound vibes. That is why you find that most web sites follow Pythagorean Numerology.

However researches have proved that predictions are more accurate by Chaldean Numerology calculations. Though easy to computerize and dish out reports in a moment, the Pythagorean lacks accuracy and reliability.

The Pythagorean is not so reliable because it does not take into account the sound vibes. It can never overtake the Vedic Numerology or Chaldean numerology as these were revealed to mankind by God Himself.

If you are not lucky with your present name, better change it. Use  our expert help, in the contact page. We design and give you the most Lucky Baby Names, Lucky Business Names, & Lucky Personal Names.

We correct your signature, prescribe Lucky Numbers,  Lucky Days, and Lucky Gems.  We confirm their accuracy by numerology, horary astrology, and with the Lecher Antenna to Ensure your Success!